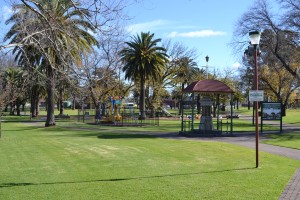 1864: The land on which this park is situated was purchased by the shire of Wimmera for 5 pound per acre from John Gillies, who built Horsham’s first flour mill. In the following years it was used by stock agents for agistment with water coming from a near-by dam. A local potter, Mr George Abbott, was said to have used it as a source of clay for his pottery which was nearby.

1874: Partners, May and Millar established the Wimmera Foundry in Dimboola Road where the Golden Grain Motor Inn is now located, and used the dam for their drainage and other rubbish which soon converted the area into the local rubbish tip.

1901: At a meeting of the Wimmera Shire Council, a committee representing the Horsham Progress Association requested the shire to hand over to the Borough Council, ”the small paddock at Maylands on the Dimboola Road (known as the old quarry) for its conversion into a miniature park” Cr Gross for the shire replied that “ to let the reserve out of their hands would be to open the way to all kinds of trouble and those that deem it an eyesore need to look at it”.

1911: The Shire of Wimmera agreed to sell the land to the Borough on lengthy terms. The Shire insisted on a genuine valuation but the sale did not proceed at this time. Several deputations and attempts by public spirited people in the following years failed to permanently secure the land for the people of Horsham. However an attempt was made to improve the area, described by the president of the Horsham Progress Association, as an eyesore and a harbour for rabbits.

1914: Mr Catani of the Public Works Department, an expert in landscape gardening outlined suggestions for the improvements to the area which was now referred to as May Park. The name was bestowed on the area by the Progress Association after a substantial donation was made Samual May to be used for the planting of pepper trees. Mr Cantan also proposed stone tablets to be placed at each end of the park to commerate the visits of explorers, Major Mitchell and Edward Eyre.

1920: After being open to the public for some years, May Park was officially opened by the Mayor, Cr J Bennett. The Borough Band marched up Firebrace Street and played selections in the park. Trees and plants had been planted according to Mr Cantani’s plans after Noske Bros flour mill had donated 40 loads of filling. Also in the 1920’s a group of customers at the Victoria Hotel decided to hold a sports day for needy children, a dedicated committee was formed to organise the event which was held continuously until the 1970’s.

1922: A group of volunteers constructed foundations and installed light for a commemorative gateway on the eastern entrance to the park. These new gates were donated by Mr and Mrs Berry and were manufactured by the Cyclone Fencing Company.

1930: Band recitals were held to celebrate the opening of a new band stand in the park, half of which cost was paid for by James Millar of May and Millar Foundry, Mr Millar also donated the drinking fountain which stood at the intersection of Firebrace and Wilson Streets for many years and was moved to May Park in 1947. At the unveiling ceremony on February the 19th, 1902, Mr Millar told the crowd that, “the gift to the city was a present for the town and district which had treated he and his family so kindly.”

This Horsham icon provides an oasis for travellers, a restful haven for locals and a place for children to enjoy the playground equipment protected from the Western Highway traffic by a security fence which was donated by the Horsham Sports and Community Club. May Park today is far removed from the odd shaped and unwanted piece of land it once was.

This information was researched and compiled by Bob McIlvena.